Historically Chitral was known as an independent princely state. After independence, Chitral was the first state to declare the accession to Pakistan. In 1970, it was declared as a district of Pakistan and attached to the Malakand Division.
One of the major attractions of Chitral is the Kalash valleys the home of the Kafir-Kalash or “Wearers of the Black Robe”, a primitive pagan tribe. Their ancestry is enveloped in mystery and is the subject of controversy. A legend says that five soldiers of the legions of Alexander of Macedon settled in Chitral and are the progenitors of the Kafir-Kalash.
The 3,000 strong Kafir-Kalash live in the valley of Birir, Bumburet, and Rambur in the South. Bamburet, the largest and the most picturesque valley of the Kafir-Kalash, is 40km from Chitral and is connected by a jeep able road. Birir, 34km away is accessible by a jeep able road. Rumbur is 32km from Chitral. Their picturesque headgear is made of woolen black material decked out with cowrie shells, buttons and crowned with a large colored feather. In parts of Greece even today some women sport a similar head covering. The Kalash people love music and dancing particularly on occasions of their religious festivals like Joshi Chilimjusht (14th & 15th May – spring), Phool (20th – 25th September) and Chowas (18th to 21st December)

Situated on the main crossroad to Central Asia, Chitral has a long and fascinating history. In fact, it is this strategic location that compelled invaders to capture it before any other area in the region. The recorded history of Chitral begins with the Tibetans invading Yasin Valley in early 8th century AD, followed by the Chinese 7M) AD and the Buddhists in 900 AD. Later, the Kalash also ruled Chitral for decades. In the 14th century, Chitral became a unified independent under the rde of Shah Nasir Rais. In 1570, the Rais dynasty was replaced by the Katoor dynasty. The famous mehtar of Chitral Aman-ul-Mulk ruled from 1857 to 1892 In 1895, the siege of Chitral Fort took place and lasted a month, after which Chitral an independent state under British rule. Finally, in 1969 it was merged into Pakistan.Today, Chitral hosts ancient Chitrali Tribes as well as nomads who ‘Vere invited by the mehtars to settle in the state. Chitral is also home to the ancient pagan tribe of the Kalash who are now confined to the three valleys of Bamburat, Rambur and Birir. The original state of Chitral covered a greater area, with its borders reaching as far as Badakhshan and Bashqal in the north-west and Kunar Valley in the south (these areas are now part of.In addition, the state extended to Sherqilla on its northeastern front and which lies in Gilgit today.

The culture of Chitral bears traces of Greek, Iranian,Tatar and Turkish influences due to its unique location and historical links with Central Asia and Europe.The Chitrali people call the land of Chitral “Kho” and their language is Khowar. Persian is spoken only Madaglasht Valley. Pushto and Urdu have also made they’re into Chitral. Other languages spoken in Chitral include Kalash, Gujari, Nuristani, Dameli, Wakhi, Kirghiz, Yidgha, Gawar-Bati and Phalura. The tradition of hospitality can be observed throughout northern Pakistan but in a few places, it is offered as generously as in Chitral. Chitralis also have a strong musical tradition. The Chitrali sitar, a string instrument, can often be heard at many places and family gathering. Polo is the most popular sport in Chitral which has attained dary status. Matches are festive occasions, inevitably many tourists. The world-famous Shandur Polo Tournament is held between Gilgit and Chitral every year from 7th to 9th of July at Shandur Pass near Laspur Valley.

When to visit Chitral

The best season to visit Chitral is from April to September.

How to Reach Chitral

PIA is operating two flights to Chitral every week. One from Islamabad and the other one from Peshawar.

It is a beautiful route which passes through the beautiful Lowari Pass. It takes about 8 to 10 hours to reach Chitral from Islamabad via this route.

Must Visit Places in Chitral

Governor cottage is beautiful and graceful architecture which exemplifies the glorious and typical Chitrali style of construction. Now this place is open for the general public. Governor Cottage is placed at a height location and surrounded by greenery. You will find many historical objects which are preserved there and are in very good shape. After visiting this place, you will surely get an idea about the royal living style of Mehar of Chitral.

Chitral Gol National Park is located at a distance of two hours’ drive from Chitral town. The park is also known as Chitral National Park.

The Birmoghlasht part of the park is where the former Mehtar’s Summer Fort is located. At the time of existence of the Chitral State, the Mehtar and his family use to move here in the summer and hold court. The fort was constructed in such a way that it overlooked the entire city. It stands at an elevation of over 2800 meters above sea level. It is a 40-minute drive from the main Chitral city. The best season to visit Birmoghlasht is the month of May and June. Spring season arises here in these months and there will be a lot of greenery and flowers in these two months.

Every place has its own unique culture and art that is preserved in different forms. Chitral Museum is truly a preserver of its ancestor’s art that is left for the future generation. The Museum built on 8 July 2010 and the main idea was to maintain the cultural heritage for the tourist. The museum is divided into two different sections that is Ethnological Gallery and Archaeological & Kalash Gallery. In its first section, we encounter the jewelry, instruments furniture of the ancestor that was used in 12 century. On the other hand, things are related to the Kalash that shows the cultural heritage of Greek. Notable, the things that are concerned to their God and Goddess

The Chitral Fort is a fortification in Chitral town, Khyber Pakhtunkhwa, Pakistan. The fort is situated on the banks of the Chitral River. The fort has a commanding position on the river and is believed to have been built in 1774 during the reign of Mohtaram Shah Katur II and restored in 1911 by His Highness Sir Shuja ul-Mulk. The compound used to house the barracks of the guards of Mehtar of Chitral.

The fort was declared as the personal property of the last ruler of Chitral following the merger of Chitral State in 1969. It is now occupied by the current ceremonial Mehtar, Fateh-ul-Mulk Ali Nasir who has renovated the old Darbar Hall and staterooms following damage sustained during the earthquake of 2015.

GaramChashma (literally: Hot Spring) is one of the many branch valleys of Chitral District, situated in the extreme north-west of Pakistan.It is one of the highest human settlements in the Hindukush ranges with an altitude of almost 2550 meters (8389 feet). The place is known for Hot spring, which is one of the tourist's attractions sites. It is also famous for its trout fish. The water flowing down through the length of the valley is famous for fishing sport. The Lotkoh River (GaramChashma River) running down from the lofty peaks of the Hindu Kush is a heaven for the brown type of trout fish. Other features of the area include snow-covered peaks, pleasant weather, natural springs, and more recently has remained in the limelight for being a potential site of hydel-power generation. Besides tourists, people suffering from skin diseases also visit the hot spring for treatment. It is located in the North-West of Chitral at a distance of about forty-five kilometers by road. It shares international borders with Afghanistan being situated in the extreme North-West of Pakistan. Dorāh (Do Rāh) Pass (14,940 feet [4,554 meters) connects this part of Pakistan with Badakhshan, the adjacent province of Afghanistan.

The most famous valleys in Chitral are the Kalasha Valleys. The valleys are surrounded by the Hindu Kush mountain range. The inhabitants of the valley are the Kalash people, who have a unique culture, language and follow a form of ancient Hinduism. As such, the Kalasha Valleys are a source of attraction for Pakistani as well as international tourists. There are three main valleys. The largest and most populous valley is Bumburet (Mumuret), reached by a road from Ayun in the Kunar Valley. Rumbur is a side valley north of Bumburet. The third valley, Biriu (Birir), is s side valley of the Kunar Valley south of Bumburet. The most famous and most visited valley among these three is the Bumborate Valley which is 36Km from main Chitral city.

Golen is grassy land full of amazement, the tall fruit-laden trees, rare spice of flora, pleasant climate, tremendous waterfall, the cold water of the stream, make anyone spellbound with its bewitching ravishing beauty. 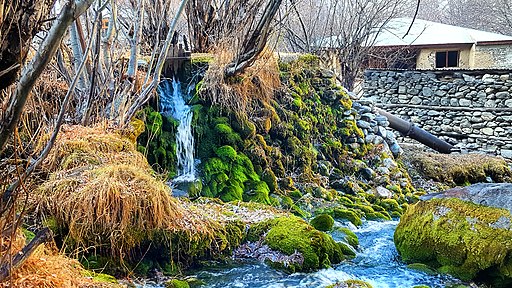